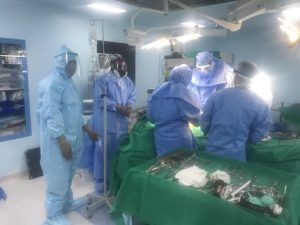 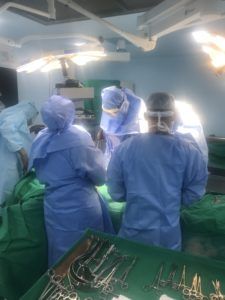 Let’s see the situation two months ago….. If any person’s corona report is positive, it leads everyone around him to panic. Everyone seems to remember how close I was to the patient and how much risk I am having. Relatives and neighbors will ask for news from afar. If there is a need for treatment after diagnosis, it is a big deal. Medical and paramedical workers who were involved in treatment of corona positive patients were at high risk. When the government allowed treatment in private hospitals, all beds were flooded with patients. And if any surgical problem in a corona positive patient the fear was at peak. Another problem was that the risk of surgery is much higher, both for the patient and also for the treating doctors. According to the data of the whole country, the death rate due to this disease was very high amongst the doctors. In such circumstances, a call came to me (Dr. Dhaval Mangukiya) for a patient in the middle of the night. His status was critical with 50% of the lungs damaged due to corona in the CT scan report. Simultaneously the large intestine was ruptured due to ulceration and the pus spread throughout the abdomen. Under other circumstances, I would confidently explain to any such patient and perform the surgery. But here the disease was two with a supra additive effect on the patient. The patient’s relatives were tired of roaming in multiple hospitals. I felt pity for the patient and fear for me. There was a moment that thought came into my mind that why should I take the responsibility on my head of performing the operation when the chances of the patient surviving is very low. Then the very next second I told myself if the relatives have a good understanding let’s take a chance. As soon as I explained the condition, the relative accepted immediately. I had mentally prepared for myself. Now it was time to see how the anesthetist and operation theater staff would be prepared? Fortunately, good-natured people are found in the medical field immediately and I also found a courageous anesthetist (Dr. Rajesh Shah). In one sentence, he said, “If you are ready for an operation, I am also ready to give anesthesia (Anesthetists are at the highest risk in such patients).” Staff of Maitrey Hospital also got prepared for the task immediately. A complex surgery was performed with every precaution from two to four o’clock at night. After the surgery, such courageous physicians (Dr. Himanshu Patel, Dr. Suchay Parikh and Dr. Ronak Nagoria) gave full support for the treatment of Corona. We got an outcome which seemed impossible initially. On the seventh day, the patient was in good health and good thing was none of us were infected. I can say faith in ourselves is strengthened. The precautions we were taking are still the same, the understanding has increased.